The Pride of San Leandro 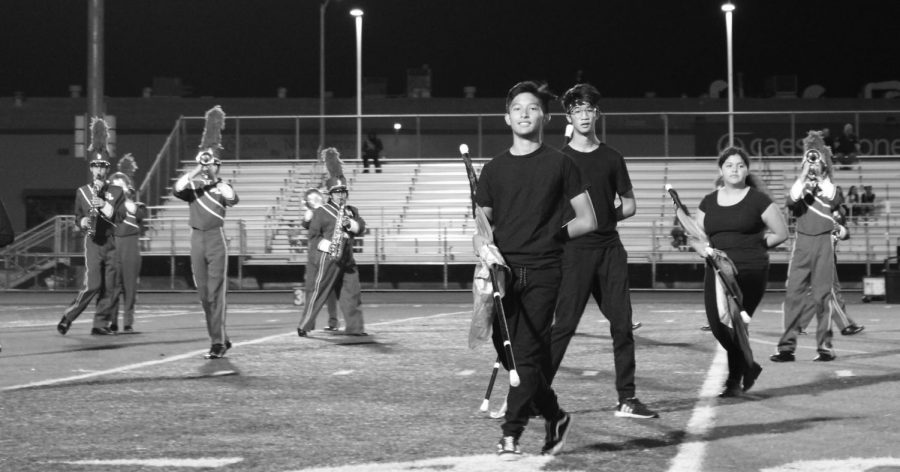 The SLHS Marching Band is back! This year, the band debuted their new uniforms and played “I Bet My Life” and “Thunder” by Imagine Dragons on the football field.

This year, color guard was added to the marching band. Zach Ramos, a graduate from Arroyo High School, taught color guard for the first time this year at SLHS. Mr. Ramos said that he was really proud of this year’s guard.

“Hopefully in the future, we could have more members and people who are willing to do guard. If we become good enough, maybe we could go and compete,” he said.

One of the color guard members, Esabo Vo (Bo), was excited to be part of the new color guard. Bo said the most difficult part of color guard was learning the tricks and then performing them on the field. The skills Bo learned have become part of his daily life.

“Spinning other objects became way easier; hand me a spoon, and watch me spin it,” said Bo.

Practices were held after school for 3 hours on the blacktop.

This is the second year SLHS has had a marching band under the direction of Jarrett Hansen. Mr. Hansen, originally from Chicamum, Washington, can play the French horn and has participated in marching band throughout high school and college. He came to teach at SLHS because he believes that the band can achieve so much.

“I saw lots of potential for the band program,” he said. Mr. Hansen hopes that the band will participate in more competitions and events in the future.

The marching band was led by drum majors Edgard Gonzales and Veotis Latchison. They were responsible for conducting the band and keeping the tempo. The drum majors also led the Saturday practices. “The most difficult part,” said Latchison, “was trying to help and work with people with different personalities.”

Although tedious, the practices were essential for the band. “Without them, we wouldn’t have been nearly as successful,” said Gonzales.

The Marching Band may still be in it’s beginning stages, but it made an impressive showing this year through its music, uniforms and its new addition of color guard.