Farley was recognized for his contributions to the San Leandro Community 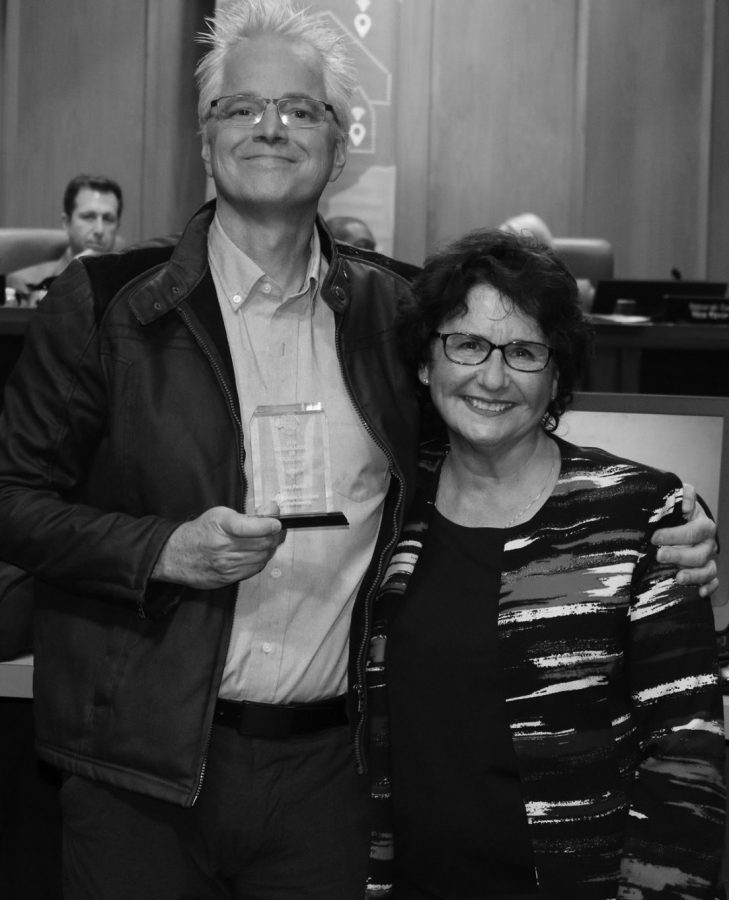 Mr. Farley’s contributions to the SLHS community have been noticed daily through his work with SLAM and the various video projects, but now they have been officially recognized by the city of San Leandro. He was recently awarded the Mayor’s Award for Excellence for making a difference in San Leandro.

“Tony has been so instrumental in so many people’s’ lives,” said Mayor Pauline Cutter. When asked about the award, Mr. Farley expressed his disbelief since “there are so many teachers that do such great work and great things that don’t get recognized.”

He believes that due to his SLAM classes, he gets recognized all the time, but Mr. Farley reveals his students are the ones who need to be credited for all the amazing work they do since he only directs them.

Mr. Farley has taught at SLHS for 21 consecutive years, with this year being his 22nd. He was an integral part of the founding of the San Leandro Arts Education Center at SLHS.

The SLAM Academy formed when the video production teacher at the time mentioned it would be a good idea to create a program that allowed students to explore their artistic abilities and build on their skills every year. Several teachers and the previous principals worked together to receive a grant for the academies. Despite not receiving the grant, the teachers decided to create the program anyways.

Mr. Farley explained that his interests in teaching sparked when he was a student at Delta College, where he began earning money tutoring students. When he was a graduate student at UC Santa Cruz, he became a teacher’s assistant.

“The teacher assistants are the ones who help the students do all the work. I would hold classes every night where 30-40 college students would come. I enjoyed that a lot and all my students loved me,” he added. Mr. Farley is currently working on getting all the SLAM projects onto the local Comcast and AT&T Channels. The SLAM Fall Student Media Special is already on the local Comcast Channel 15 and AT&T Channel 99 on Sunday, Monday, Thursday at 9:00 a.m. and Monday, Tuesday, Friday at 3:45 p.m. He said his goal is to, “start filming the sporting events, theater performances, and all the activities teachers do in their classrooms. I want to get a lot of what’s going on here at the high school, out there to the public so people can see it.”

Mr. Farley wants the students of San Leandro High to know they are encouraged to utilize the studios and equipment in the SLAM building.

“The studio right now has nothing happening. We can have someone in there creating their own television or podcast show if they just wanted to do it. The biggest problem is getting people to actually make use of all the resources available,” he said.

If anyone has an idea for a project or show that they want to do, Mr. Farley says they should talk to him and he will help them get it done