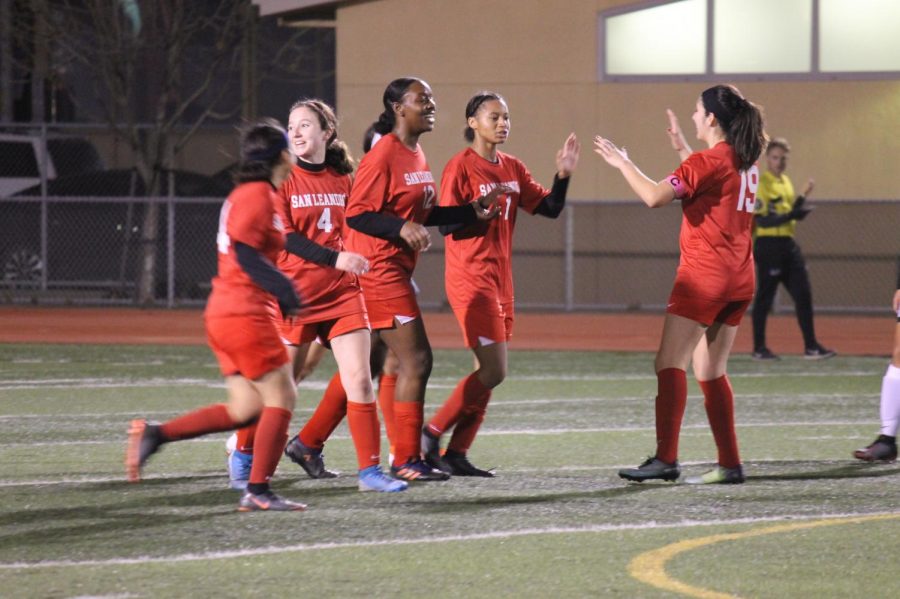 The San Leandro Girls Varsity’s season has been nothing but a success! Sitting at the top of the league, they clinched a playoff spot, after a blown out game against Tennyson HighSchool, scoring 5 to 0 on Jan 29.

Before the season started, Coach Juana, head coach of the soccer program, quoted “ Well the last couple of years, we have been very strong and as a unit, being together and being a team… the new freshman came in and set the tone for next season”.

Five freshmen out of 16 players are leading the future of the team. Ameoly Garcia, number 8, was asked what makes the team so successful.

“I think the team is really successful when they have a really good connection and communication, like our team is basically like a family! We can be funny and goofy to each other, but when it comes to getting the job, like we’re always there for each other” The team this season has 6 seniors including Garcia, is proud of the work they’ve achieved for the game they love so much.

On Senior night, the game was a success and on Feb. 13, the girls took on the challenge going 1-0 against Arroyo from a late goal by Daniela Del Carlo in extra time, sealing the game. With momentum on their side, they played the WACC Championship against Mt. Eden, the needed one more win that would take them to NCS, but they lost the tough game that ended the season.

“I’m actually really happy with how the season turned out. I’m proud of my team and what we were able to accomplish. We weren’t able to get the outcome we were hoping for but our hard work was not for nothing,” said Aurora Friedman.